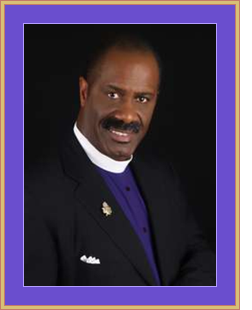 GREGORY G. M. INGRAM was appointed presiding prelate of the First Episcopal District of the African Methodist Episcopal Church on July 4, 2012, during the 49th Quadrennial Session of the denomination's General Conference, held in Nashville, Tenn.  At the 2008 General Conference, Bishop Ingram was elected to chair the General Conference Commission, which oversaw planning and organization for the 49th Quadrennial Session.  In his new assignment, he will preside over seven annual conferences comprising Delaware, New England, New Jersey, New York, Pennsylvania and the British Overseas Territory of Bermuda.

In the year, 2000, Bishop Ingram was elected and consecrated as the 118th Bishop of the African Methodist Episcopal Church.  His first appointment as a Bishop was to the Fifteenth Episcopal District, comprising Angola, Namibia and most of South Africa.Prior to his current assignment, Bishop Ingram served as President of the Council of Bishopsand in his second assignment as bishop, served as the Presiding Prelate of the Tenth Episcopal District (TEXAS).  Under his anointed leadership Bishop Ingram introduced the District to theTen-Point Partnership Plan, a strategy for improving every aspect of life for the people of the Tenth Episcopal District through:Before his election to the Episcopacy, Bishop Ingram served for thirteen years as the Senior Minister of Oak Grove AME Church in Detroit, Michigan.  Under his leadership, 2,400 members joined Oak Grove and more than 1,420 became tithers.  Prior to his Oak Grove assignment, Bishop Ingram served as pastor of AME churches in Chicago, Springfield and Alton, Illinois.  He also served two years on the religious staff at Southern Illinois University, Edwardsville Campus.Bishop Ingram has distinguished himself throughout African Methodism for his expertise in stewardship and tithing and is a dynamic preacher and lecturer who is sought after to speak at churches, colleges, universities and civic functions.He has authored a number of publications that are heralded throughout African Methodism.  Included among them are:His civic, community, professional and social affiliations, past and present, include the:Bishop Ingram holds a Bachelor of Arts degree from Wilberforce University, a Master of Arts degree in Teaching from Antioch College, a Master of Divinity degree from Garrett Evangelical Theological Seminary and a Doctor of Ministry degree fromUnited Theological Seminary.He is a member of Kappa Alpha Psi Fraternity and is a Thirty-Third Degree Mason, Prince Hall Affiliation.Bishop Ingram is married to The Reverend Dr. Jessica Kendall Ingram, who is his devoted partner in ministry.  They are the proud parents of one adult daughter, Jennifer Eman Keanne, and the grandparents of one treasured granddaughter, Jayda Eman Keanne.